Sushi has seen a huge surge in popularity in Western culture in recent years.

It’s not unusual to see Japanese-style sushi bars in big cities throughout the USA flooded with locals. It’s even becoming increasingly popular to make your own sushi from home using sticky rice and nori sheets along with whatever meat you desire (if you eat meat, that is).

I recommend making your own traditional sushi from home as it’s in another league compared to the Westernized supermarket kind.

A true sushi experience is unforgettable and difficult to recreate. Sushi experts throughout Japan know how to make each and every bite a conglomeration of color, taste, texture, and presentation. 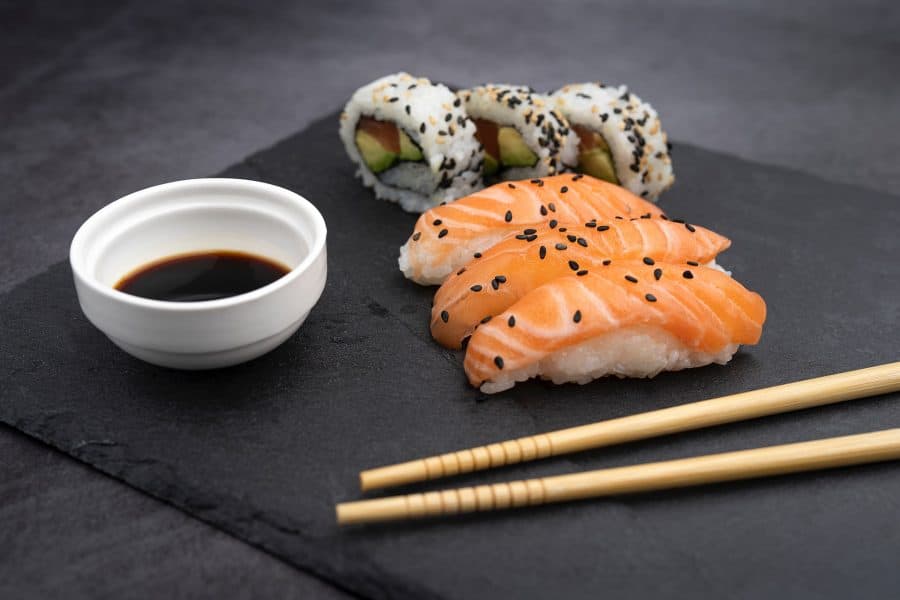 Contrary to popular belief, sushi did not originate in Japan. Although the Japanese get full credit for what we call sushi today, the inspiration for sushi is thought to have started in Southeast Asia.

Narezushi, which is fermented fish wrapped in sour rice, originated somewhere around the Mekong River before spreading into China and later Japan.

The modern-day concept of sushi was invented in Japan by Hanaya Yohei sometime around the end of the Edo period sometime in the mid-1800s.

Since sushi is made from a lot of raw ingredients, it can go bad pretty quickly. Sushi should never be kept at room temperature for very long.

You may have some leftover sushi from your favorite restaurant that you’d like to keep or even made a huge batch of your own and can’t finish it all in one sitting. So, is freezing sushi a good idea?

Freezing sushi can affect flavor and texture due to freezer burn. This is well-known throughout Japan, where fresh sushi is traditionally served without freezing. However, even the freshest raw fish in Western sushi restaurants has been frozen, which typically damages taste and texture.

How do I freeze sushi?

If you’re planning on making your own sushi at home and you know there’s going to be plenty of leftovers, freezing your sushi is a good way to prevent any food waste. However, we recommend freezing your homemade sushi ingredients separately.

Prepare the ingredients as you normally would, but separate the rice, fish, nori, and any vegetables and extras you want and put them into different freezer-proof pots or bags.

You can assemble them later once they have thawed. Make sure to season all of your ingredients as you normally would before freezing.

Your fish should not be sliced before putting it into its freezer container as the frost can damage the texture. Seal the container with an airtight lid, write the date of freezing on the container, and pop it in the freezer.

The rice should be spooned into its container while it’s still steaming hot, sticky, and moist. Nori sheets should be placed in a resealable plastic freezer bag.

Make sure to squeeze it to expel any extra air to keep it as fresh as possible, then stick it in the freezer with the rest of your ingredients.

If you’ve just been out to your favorite sushi restaurant and have a ton of food leftover but don’t want to waste your expensive meal? Fortunately, you can take it home and pop it into your freezer to enjoy it later.

How do I defrost frozen sushi?

Your frozen sushi can be defrosted by moving it from the freezer to the refrigerator. You should leave it overnight until it has completely thawed.

It’s important to note that sushi should not be defrosted at room temperature under any circumstances. This creates the perfect atmosphere for harmful bacteria growth and increases the risk of cross-contamination.

Once your sushi has thawed completely, you’re ready to dig in. As sushi is traditionally served chilled, there’s no reheating required. Don’t be tempted to warm your sushi, as raw fish is extremely temperature-sensitive and it could increase the risk of contamination.

Factors to consider before freezing sushi

If you freeze sushi rolls, unfortunately, the reality is that they won’t taste the same once you thaw them.

The ingredients that are at risk of falling apart and hardening or going mushy are the Nori paper and the rice, so once you thaw the rolls, they might start looking less like rolls and more like a mushy ball.

In most cases, the frozen sushi rolls will fall apart, break apart, and start to become soggy once wholly thawed. Also, be aware that some of the sushi fillings may be altered in appearance once frozen.

Avocado tends to go black, and the cucumbers can become very soft. The rice can become chewy, almost rubbery, and the Nori paper can be very sticky. The texture will not be the same as it is for fresh rolls.

In conclusion, sushi is still going to be enjoyed best fresh.

However, you don’t see that sort of quality often unless you’re in Japan, so freezing your sushi is a viable option.

It’s great for when you’ve made a little too much or want to savor your favorite dish, just be sure to follow the instructions carefully to avoid contamination and don’t expect them to be as perfect as they were before freezing.