A popular and versatile cooking ingredient, evaporated milk is a staple in pantries worldwide thanks to its long shelf life, used in recipes for sweet and savory dishes alike, and you may be wondering if you can stretch it past the use by once open.

Much like its fresh counterpart, evaporated milk spoils after around five days of being opened, faster if you don’t store it in a sealed, airtight container and opt to refrigerate it in a can, as air exposure can cause faster curdling. 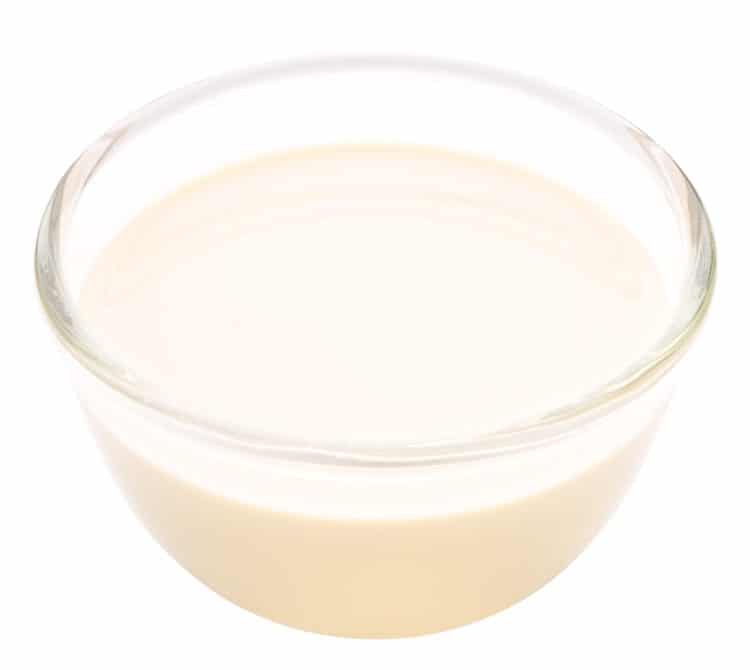 Although manufacturers of evaporated milk products discourage their customers from freezing, it’s up to you whether you want to try it out, bearing in mind that whilst it might not look the same, it’s still usable after it’s defrosted.

We’ve done all the heavy lifting and researched the best methods for success, the easiest way to defrost afterward, and some alternatives for using up leftovers if freezing isn’t an option or you’d prefer not to.

Evaporated Milk – What Exactly Is It

As the name suggests, evaporated milk is produced by heating milk until approximately sixty percent of the water it contains has evaporated into steam, to leave a dense, incredibly concentrated liquid.

Once sterilized, homogenized (a process to avoid the separation of cream) and packaged in cans, it is safe (and delicious) to use for up to half a year, a period that far surpasses regular milk.

Because it can easily thicken a dish without necessarily adding any sweetness, it’s popular amongst amateur and professional chefs alike, and useful to have on hand just in case, without needing to worry about using it up in time.

As we already said, it’s common to find that the FAQs on the websites of popular evaporated milk products advise you don’t freeze – this is because the solid and liquid components of the milk are likely to separate during the process.

This means that the physical properties of the milk will be altered, affecting the color, flavor and texture, but it doesn’t necessarily rule freezing out altogether, rather, discourages consumers from a potentially negative experience.

Unfortunately, it’s impossible to reverse this to return your evaporated milk to its original creamy texture. Of course, if you’re planning to use it as part of a recipe (as opposed to eating it with a spoon) that doesn’t pose much of a problem.

As long as you follow our simple steps for successful freezing, there’s no reason why it won’t be perfectly fine to cook with, even though it might look a little strange when you take it out at a later date.

It’s not recommended you freeze the can of milk as it is, because it’s then going to be very tricky to remove from the can once frozen unless you’re willing to wait around a day for it to thaw completely.

Pour the contents of your can into the Tupperware (or equivalent) airtight, sealed container of your choice, being careful to leave a little bit of room for the liquid to expand during the freezing process – you don’t want your tub to explode!

If you’d rather have handy little cube-sized portions of evaporated milk on hand, consider using an ice cube tray instead, though be careful not to spill it as you walk to the freezer – maybe work out where you’re going to put it beforehand, too.

To prevent freezer burn (and increase your chances of retaining that creamy texture later on), which will also minimize the risk of spilling, cover the tray or container in a layer or two of plastic wrap before you pop it in.

Top Tip: label your container or trays with the date of freezing, and maybe how close to the use-by date your milk was before you froze it, as if it was already on the way to being spoiled, you’ll want to consume it quicker after defrosting.

How To Defrost Stress-Free

Speaking of defrosting, how should you go about that? Well, you don’t actually have to if you’re planning on cooking right away – if you’re using heat, take as much of the frozen milk as you need and it should stir in just fine in most cases.

For more delicate recipes, or if you’d prefer an easier liquid to work with, you should pop your container (or cubes, in a sealed freezer bag) into the fridge overnight, making sure to use a plate if you’re worried about any leakage.

Once defrosted, you’re going to want to use up the milk as soon as you can, particularly if it was on the outs before freezing, to avoid a stomach upset – imagine drinking a cup of spoiled milk! Yuck!

Of course, it’ll be pretty apparent if your milk is no longer fit for purpose – you’ll notice a strange smell, at which point you should accept defeat and toss it, as the potential time spent in the bathroom isn’t worth it. Just go to the store!

Using Up Your Leftovers?

If you only have a little left and it isn’t worth freezing, or you’d prefer to use up your leftovers today rather than saving for an emergency, there are several ways you can finish off a can that you might not have thought about.

It works great as a substitute for other dairy products, for example in exchange for milk or cream when making mashed potatoes, creamy soups and sauces or mac and cheese – it you’re looking for a decadent texture, you won’t go wrong!

Where a lot of dairy products would be likely to curdle after hitting higher temperatures, good ol’ evaporated milk won’t let you down: it’s great to steam up for use in lattes, hot chocolates and other tasty beverages.

Remember, using this condensed milk is an easy way to thicken up a dish and make it more indulgent, without adding unnecessary fats to your meals, so if you’re trying to eat more healthily, it’s an excellent substitute when you’re on a diet.