Leeks are often overlooked, but they are a great vegetable. They are healthy with a great flavor and delicious texture, making a great addition to most meals.

A fun fact about leeks which you may not know is that they are a symbol. The country of Wales located in the United Kingdom places a great amount of value in the leek, and it is actually a symbol of the country.

Leeks can make a great side garnish to your lunch and provide added flavor, but what happens when you prepare too much? 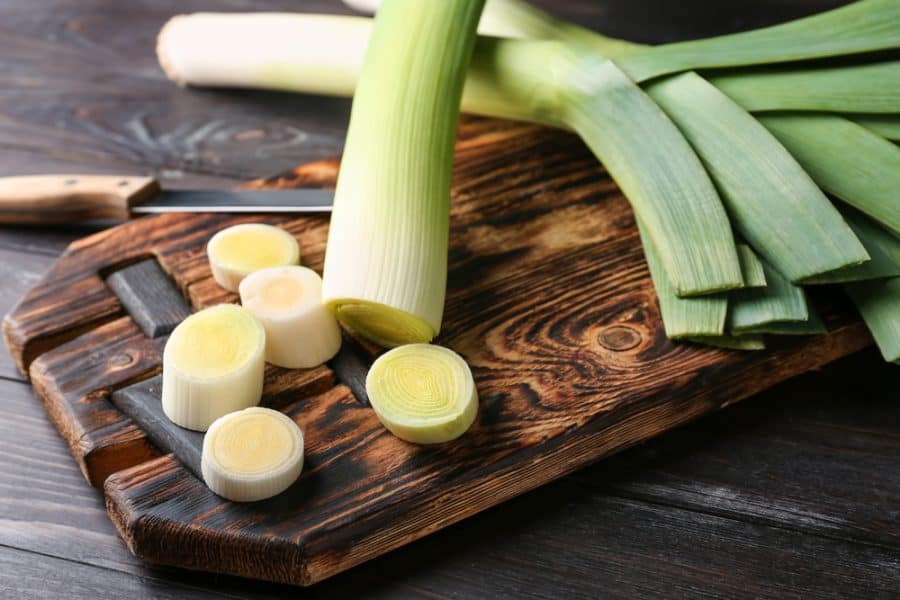 It’s simple, freeze it. Leeks have a high water content which does make it harder to freeze, but you can freeze leeks if you want to.

The most important thing when freezing leeks is preparation. Follow this guide and freezing your leeks will be simple.

How to freeze leeks

With some foods, you will find freezing is as simple as placing the packet in the freezer but for leeks, this is not the case.

If you wish, you can reduce this process by freezing your leek whole. However, we do not recommend this. Whole leeks are incredibly thick so they will take a very long time to defrost.

You will be unable to cut the leek or do anything to it until it has thoroughly thawed, so freezing whole could slow your cooking process considerably.

Instead, we recommend chopping and preparing the leeks before freezing. You should begin the process by cleaning your leeks and drying them.

From there you should trim the route end of the vegetable off and cut any excess green sections. This will make your leek ready to chop. You should cut your leek into your usual manner as if you were going to cook the vegetable now.

Next, you should bring a pan of water to a boil. We are not cooking the leeks before freezing, we are simply blanching them to prepare them for freezing. Drop your chopped leek into the boiling water and blanch for between 30-45 seconds before submerging in cold water to cool the vegetables thoroughly.

Then you can drain the leeks and lay them to dry. The best way to do this is to lay the leeks flat in a single layer on a baking tray. The leeks must dry thoroughly as you want to keep the water content as low as possible to protect the consistency of the leeks when frozen.

Once you are confident that the vegetable is dry, you should place the baking tray holding the leeks into the freezer for one hour. This hour will flash freeze the leeks and ensure the outside of the vegetable has frozen.

After the hour you should take the tray out of the freezer and pour the frozen leeks into an airtight container. You should label the container with the storage date then return to the freezer for future use.

How to defrost leeks

Freezing leeks isn’t always the best option, but if you have leftovers or vegetables that would otherwise turn, you can freeze them. If you chose to blanch your leeks before freezing this can extend the shelf life up to 10 months once frozen.

However, if you chose not to blanch them the leeks will only have a shelf life of 2 months. Like with everything that you freeze, you should use the leeks as soon as possible for the best taste.

When it comes to defrosting leeks, you have a few options to choose from. These will be more appropriate depending on how you plan to use the leeks.

If you want to use the leeks as a garnish and do not need to heat them, you can simply remove the container from the freezer and place it on the countertop. The leeks will be ready to eat within the hour.

Likewise, if you want to use the leeks within a cooked dish the defrosting process is also easy. By easy, we mean you don’t need to thaw them.

Instead, you can simply add the frozen leek into that dish and adjust the cooking time accordingly to accommodate the frozen ingredients.

Similarly, if you want to cook your frozen leeks there is no need to defrost them. You have two cooking options: boiling or sauteing. To boil the leeks you should bring salted water to a boil and add the leeks.

Within 8 minutes you will have leeks which have cooked thoroughly as the thawing process is much quicker in hot water.

Alternatively, you can saute the leeks. You should do this by adding butter to a pan over medium to low heat. You should add the leeks to the pan and keep at this temperature until thawed.

Once thawed you can turn the heat up and cook until they reach your desired color.

Factors to consider BEFORE freeze leeks

There are some factors you should consider before you freeze your leeks. The main one being, is it worth it?

Leeks have a high water content which makes them difficult to freeze. The only way you can freeze them is by completing an extensive preparation process, and even then the consistency of the leeks will be damaged.

For some vegetables, freezing is a good idea to reduce the preparation process for future use, but this is not the case for leeks. In fact, leeks should only really be frozen as a last resort to prevent waste.

While you do not have to thaw leeks for most dishes, it could be a good idea to divide the chopped leek into cooking portions before freezing. This will allow you to simply take out one container and reduce preparation time in the future.

As the freezing process for leeks is already quite taxing, this extra step will not seem like much work.

The most important thing you should consider is blanching your leeks before cooking. This may seem like a lot of effort at the time of freezing but it increases the shelf life of your leeks significantly so it is worth it.

So the answer is yes, you can freeze leeks.

It is not recommended if you are looking to do meal prep, but if you have leeks that will otherwise go in the trash, freezing can be a great option.