Jello shots are a great feature at parties. They’re fun to both make and eat, but what happens if you make too many? If you’ve found yourself with some leftover jello shots and are wondering what to do with them until next weekend, you might be considering putting them in the freezer.

It’s a horrible feeling to waste any kind of food or drink but wasting alcohol is almost definitely a sin. 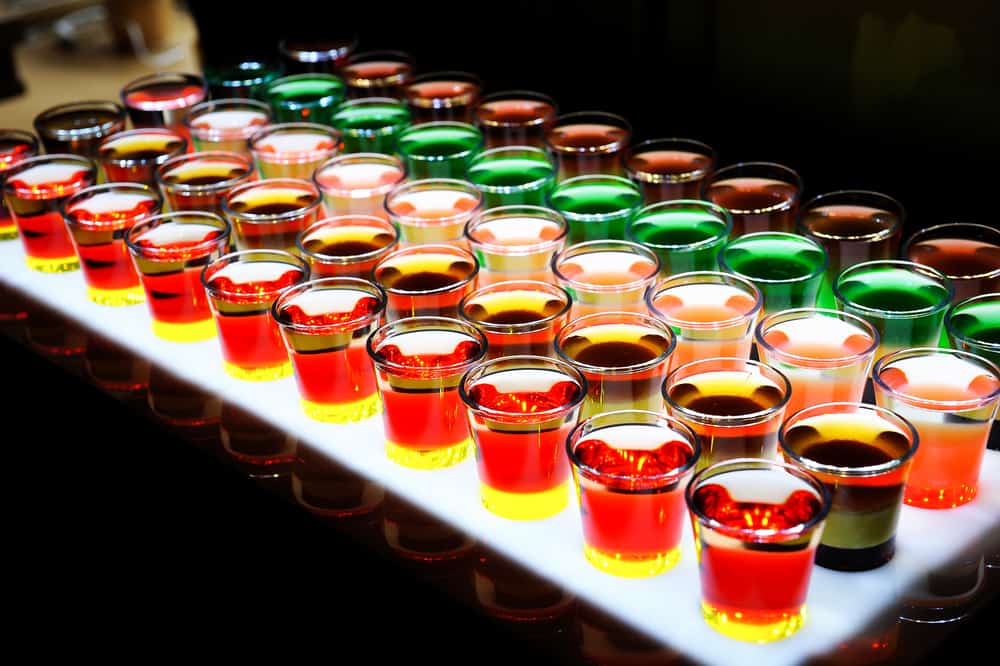 Even if you’re currently reading this with a raging hangover, you probably know that you can’t just throw them in the trash and are wondering if you can just put them in the freezer and forget about them.

Jello shots are a strange consistency so it can be difficult to tell if they can be frozen. So, can you freeze jello shots? The answer to this, like most things, is “not really, but...”. Freezing jello shots isn’t as straightforward as you might expect, so here are a couple of things to think about before you put them straight in the freezer.

How to Freeze Jello Shots

Jello shots are usually made in the same way you would make normal jello, but with added alcohol. If you try to freeze jello shots after they have solidified in the refrigerator, this won’t work as alcohol can only freeze at super low temperatures.

It’s important to remember that gelatin is the main ingredient of jello. Gelatin doesn’t freeze very well and, if you put solid jello shots in the freezer, the gelatin might expand and ruin the shape and texture of the shot.

Freezing disrupts the chemical structure of gelatin which will make it crystallize and expand. Lots of foods crystallize in the freezer which changes their texture and generally ruins whatever you’re trying to make.

With gelatine, the crystallization will alter the flavor and texture of the jello shots. So, there are two options to avoid ruining your jello shots in the freezer. One option is to try using gelatine free jello.

Depending on what kind of jello you use, you might be able to by-pass the crystallization process, but you still run into some difficulty as the alcohol will be difficult to freeze.

The other option is to add juice, Kool-Aid, or Gatorade to the jello shots and freeze that instead so that they will become almost like a slushie shot. Read on or scroll down for a simple recipe for how to make these hybrid jello/slushie shots.

How to Defrost Jello Shots

Due to their gelatin content, freezing and defrosting jello shots can be difficult and messy. You can’t really “defrost” jello shots as they won’t have properly frozen in the first place.

If you decided to go ahead and freeze the jello shots after they have already been refrigerated, then they will likely be an unpleasant texture when you take them out of the freezer.

They will still be fine to eat but they won’t be very enjoyable.

If you choose to follow our jello/slushie shot recipe, then you won’t need to defrost them at all. Just like a slushie, they’re delicious when they’re cold and should go down in one just like a shot.

To freeze jello shots completely, you would need to have a freezer with a temperature lower than -144°F as this is the temperature needed to freeze alcohol. (This is why you can keep alcohol such as vodka in the freezer as it will be super cold but not solid).

Most home freezers are about -20°F, so even your deep freeze will have trouble with this. Unless you have somehow gotten your hands on a suped-up machine, having a freezer that cold is pretty impossible. Because of this, you won’t be able to freeze jello shots completely solid like an ice cube.

If you’re about to make jello shots before a party and are concerned they won’t be eaten and will be wasted, you don’t have to worry. Jello shots are pretty easy to make so you can always make more during your party if you’re running low.

Restocking the jello shots might not be your main focus during a party but, if it is, make around 2 for every person you think will show. Then, if they start running low, you can always make more for later.

How to Make Frozen Jello Shots

Although freezing already solid jello shots won’t work as well as you might hope, there is another option. If you’re reading this on a super hot day when a lukewarm jello shot isn’t looking appealing and you’re wondering how to make a frozen version, then check out this recipe for something a little different.

(Don’t worry too much about the measurements, they’re easy to alter and just make it to your own preference).

This is a great way of making jello shots that are that extra bit cold and are great for a party on a hot summer’s day.

Most alcohol is at its best when chilled and there is nothing worse than a warm drink at a party, especially on a hot day.

So, overall, you can (kind of) freeze jello shots, but not in the way that you might expect. You can try a few of the tips and tricks mentioned above, but the best option is to keep them refrigerated.

Or really, the best option is to just eat them!