Jello is a dessert so popular it started life as a trademarked product from Kraft and is now the word for any combination of gelatine, sugar, water, and fruity flavor.

It’s the stuff of childhood dreams and nostalgic memories, and it’s still eaten in enormous amounts around the country and the world. But the burning question of the age is can you freeze jello?

Let’s take this in steps.

Firstly, why would you want to freeze jello? Well, maybe there’s only so much jello you can face in a day. Maybe you have plans for a jello shot party and want to keep the jello fresh until a week next Thursday, when it’s toga-time.

Maybe you’re following a new diet where you’re only allowed to eat foods that have been purified by ice. Who knows? There are at least one or two reasons why you might want to freeze jello. So can you do it?

The answer is slightly more complicated than you might imagine. 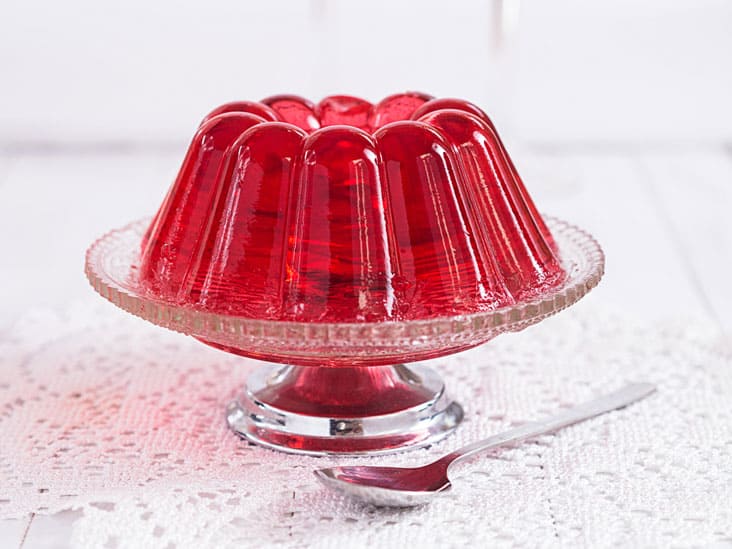 We know – what could be complicated about it? It’s jello, right, not nitroglycerin? It’s not about to go bang and take half a block with it. We give this stuff to 5-year-olds. If they can handle it, why make a federal case out of freezing it?

The reason is that you can freeze jello, yes. Eating it afterward is probably not something even the most recklessly adventurous 5-year-old wants any part of.

Let’s get our Alton Brown bow tie on for a minute and do some food science.

What Exactly Is Jello?

Sugar, water, gelatine, and fruit flavors have a good thing going in jello. Gelatine, in this case, being a substance involving collagen.

Collagen was originally rendered down from the bones and hides of animals being processed for meat, and in most cases, it still is.

There is now, after centuries, vegetarian gelatine too, but the point isn’t really the shock-value of where everyone’s favorite fruity dessert comes from. The point is what it does.

If you add water, sugar, and fruit flavor together without gelatine, at room temperature, what you have is a liquid.

If you freeze that liquid, you have a solid – or a popsicle, as they’re also sometimes known. But the temperature is crucial to defining what you have.

Leave a popsicle out on a kitchen counter for very long, and what you have is a liquid again. And a mess. And a missed opportunity.

Gelatine changes almost everything in this equation. It binds the other ingredients together in a loose but groovy way.

At room temperature, unless you’ve used waaaaaay too much gelatine in preparing your jello, it’s not exactly solid.

But it’s not exactly liquid either – it’s a loosely held-together set of chemical bonds. It’s a tiny scientific miracle, with the connected molecular threads of the gelatine holding the water, sugar, and flavor together in a wobbly but stable state.

If you want to get really technical, jello holds together at room temperature because of colloidal bonds and polymer chains at the molecular level. Chink actual chains, holding things firmly in place.

Now, when you freeze water, it stiffens up – the molecules in it move more slowly at low temperatures, and what you get is that room temperature liquid becoming a frozen solid. Popsicle City, here we come!

That’s…not what happens if you have a solution of water and gelatine.

Room temperature jello is almost as solid as jello gets. It will actually get just sliiiightly stiffer when refrigerator-cold.

You freeze jello though and instead of stiffening the colloidal bonds and putting tension in the polymer chains, what you do is smash them to bits with the sledgehammer of temperature.

When the chains and the bonds collapse, so does the wobbly, semi-set structure. Boom - end of jello as you know and love it.

What’s worse is that you don’t even get left with pure liquid jello – as you can get on the road to the dessert you know and love if you make your own, using gelatine sheets, water, flavor, and heat.

No, what you’re left with once you’ve tried to freeze jello is a kind of clumpy, rubbery liquid sludge that looks like the Martians could use it as a weapon of war against us.

Admittedly, the flavor compounds are for the most part held in stasis, so it tastes more or less the same when it’s frozen. It’s just that freezing, to jello, is the death of texture, from which there’s no return.

Oh, and side-note: freezing jello does not increase its shelf-life. So as reasons for doing it go, that’s not great either.

In what is now the vintage sci-fi movie, Jurassic Park (No, no, the original one, keep Googling…), there’s a line which says: “Your scientists were so preoccupied with whether or not they could, they didn't stop to think if they should.”

That’s more or less the story when it comes to freezing jello. You can technically do it – simply put it into any container you like and put it in your freezer.

What comes out of the freezer though won’t be the smooth, wobbly funfest of a dessert you know, love, and wanted to save for another time. It’ll be something that looks horrifying, tastes the same, and has a mouthfeel like alien death.

So…go nuts if you want to, but don’t say you haven’t been warned.

Oh, the whole frozen jello shots thing? Not So Much. There’s little if anything you can do to stop the effect of freezing on the polymer chains that make jello… jello.

Adding alcohol to that does precisely nothing to help jello retain its wobbly glory. In fact, if anything, it only prolongs the agony.

Alcohol has a lower freezing point than water, so you have to keep the jello in the freezer for longer…before it changes its texture and makes you cry.

Jello is in itself a kind of chemical masterpiece. Gelatine, water, sugar, and fruit have a good, wobbly, delicious thing going on.

You can technically freeze jello, absolutely. But there’s no real justification for doing so – it doesn’t increase shelf-life, and jello will go as happily rancid in the freezer as it will in the refrigerator or on the counter once you’ve made it up.

What’s more, while you can freeze it, you change the chemical construction in the process, resulting in a sludgy mess that’s far less appealing than fresh or nearly-fresh jello, so there’s almost literally no percentage in freezing it.

Enjoy your jello the way the crazy groovers in the Kraft chemical lab intended – cold, wobbly, fruity, and fun. Step away from the freezer, mi amigo. Lots of things can be productively frozen for later.