Spinach dip is a delicious dish that can be used either as a side or as a starter.

It is creamy but gets a great flavor from the spinach and cheese. (You can even pretend that it’s healthy because it has some greens in it, spinach is a good source of iron…).

Like most dips, spinach dip can be made in bulk but won’t last very long. Spinach dip is mostly made up of spinach (obviously), sour cream, cheese, onions, garlic, and other seasonings.

Of course, everyone has their variant on spinach dip and it’s such a simple dish that you can make it just as you like. 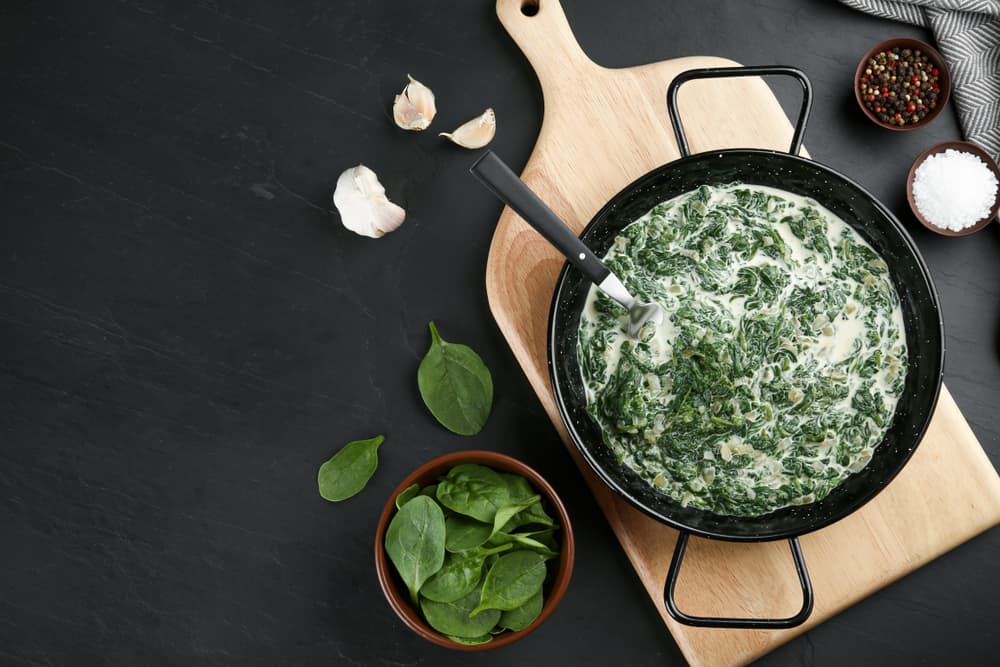 But, as with any food that you can easily make in bulk, it’s also easy to make way too much. If you’re making spinach dip, it’s probably for dinner guests or for a party.

If you’re only having a few guests over, then it’s easy to know how much you will need. But if you’re putting on a spread for a party, who knows how many people will show up and, even then, how many will actually eat the spinach dip.

As there is so much dairy in spinach dip, it can only last in the refrigerator for a few days. It may even begin to go past its best before that and you definitely don’t want to waste a dish that you spent time and energy making.

So, what’s the alternative? Can you freeze spinach dip? You sure can!

How to Freeze Spinach Dip

So, to make sure you make the most of your party dish, here’s our guide to freezing spinach dip.

As spinach dip isn’t quite a liquid but also isn’t quite a solid, it’s tricky to know how to store it for the freezer. One option is to place it in a freezer bag.

This will allow you to completely seal the bag and make sure that there isn’t any air inside. Any oxygen may cause the spinach dip to go bad, even in the freezer.

Another option is to transfer the spinach dip into a plastic tub. This is a good idea as it will be easier to store than a soft bag and is more eco-friendly.

When transferring the spinach dip from the baking dish to the plastic tub, fill it almost to the top but make sure to leave a little space.

The spinach dip will expand as it freezes and you don’t want the pressure to build up inside. If it does, then the lid could pop off and the spinach dip could end up all over the other food in your freezer.

How to Defrost Spinach Dip

This could cause it to curdle or go bad. You really don’t want to wait for it to defrost, only to find that it’s just gone bad and is inedible.

As it is such a thick dip, it can take quite a while to defrost. Don’t be tempted to put it in the microwave. It will, technically, defrost but putting something like sour cream in the microwave isn’t a good idea.

Most dairy, other than cheese, doesn’t do well in the microwave and it may explode or become too hot and thin. The settings, even if there is a specific defrost option, also aren’t great for defrosting foods that contain a lot of dairy.

If you’re about to serve dinner and have forgotten to take the spinach dip out of the freezer in time, putting it in the microwave to hurry it along won’t be too big of an issue. It just won’t be as nice.

Really, you shouldn’t put anything warm or hot in the freezer, so just remember that as a general rule.

When a food is frozen, it becomes covered in ice crystals. When the food then defrosts, so do the ice crystals and the food will take on the water. This can change the texture and make the spinach dip a little more watery. But, if you mix it all together or reheat it, it should be fine.

Another thing to consider is when you’re going to want to use the spinach dip next. There can be a tendency for people to think food can last almost forever in the freezer, but this isn’t true.

Spinach dip can last for about 2 to 3 months before it’s past its best. Even if the spinach dip won’t make you ill after this time, it will lose its flavor so it’s not worth trying to make it last any longer.

2 to 3 months isn’t a very long time for food to last in the freezer. This short time is mostly due to the high amount of dairy in spinach dip.

Dairy doesn’t last very long in general, so it makes sense that it won’t last too long in the freezer either. But, that said, freezing is still a much better option than throwing food in the trash and wasting it.

Overall, the answer is yes, you can freeze spinach dip. But, like a lot of foods, it may not have exactly the same texture as before.

It won’t be enough of a difference to stop you from freezing it, but it may need to be mixed together again or reheated.

Freezing spinach dip is a great way to preserve this dip, so if you’re wondering if it’s a good idea, then go ahead!