Sour cream is often used to complement a particular dish or as part of a recipe, and for this reason, if you don’t require a lot you may often find yourself with half of a tub leftover.

Often, this leftover sour cream sits in the fridge until it goes off which results in food waste. 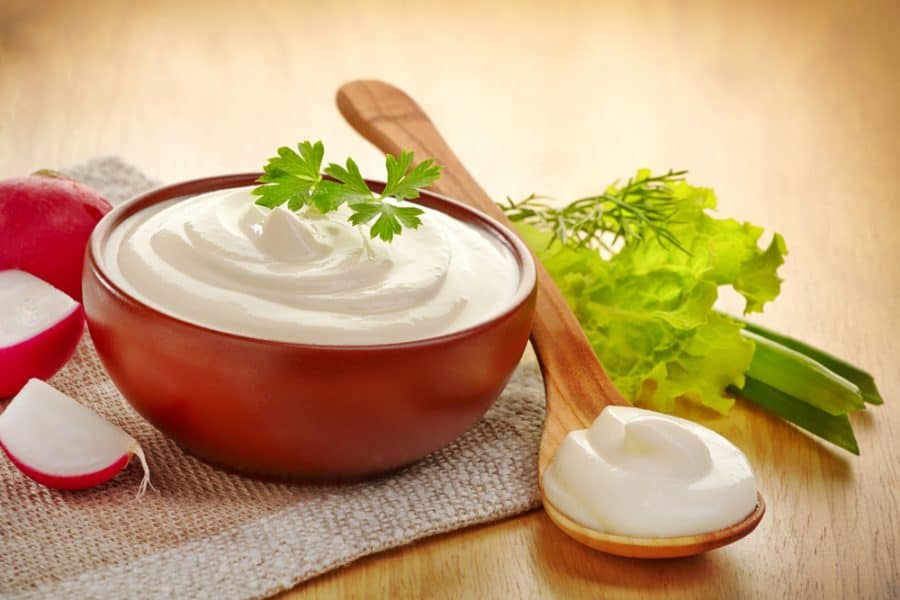 To put it simply, yes sour cream can be frozen, although some dairy producers suggest that it should be avoided. This is because, once frozen, the texture and consistency of the sour cream is going to alter significantly.

For this reason, sour cream that has been frozen should ideally only be used for cooking dishes such as casseroles or soup or used for baking. After freezing the consistency change makes the sour cream hard to spread and so it shouldn’t be used as a topping for foods.

How to freeze sour cream

If you are going to be freezing a new, unopened tub of sour cream in the original packaging, this process is very straightforward as the container can be put directly inside the freezer.

If the sour cream has been opened it can be transferred to a new container for freezing. Consider how much sour cream you are going to be freezing. If you have a small amount leftover, you may only require one container.

However, if there is a lot left inside the tub you may want to divide it into different containers for freezing. This allows you to thaw the amount that you need rather than the whole container.

How to defrost sour cream

If you have divided the sour cream into portions beforehand, you can simply defrost the quantity needed for a particular recipe.

Once it has been placed inside the refrigerator, it can take up to several hours to thaw. The time can differ depending on the size of the portions. Smaller portions are likely to thaw at a faster pace than larger ones.

When the sour cream has defrosted you are likely to notice separation and a difference in the consistency. It may also appear to be a little watery. Simply give it a mix and then it is ready to be added to some tasty recipes.

Another option is to add it to your recipes without defrosting it beforehand. While this may not appeal to all individuals, it offers a quick solution if needed.

If you are cooking soups etc, you can take the sour cream from the freezer and put it directly into the soup. Initially, it may be a little difficult to mix in, however, after exposure to the heat it should become softer.

Sour cream should not be refrozen once it has been defrosted as this can result in bacterial growth.

In general, sour cream tends to last for around 2 weeks after it has been opened, however, if you want to freeze it, this should be done while the product is still fresh.

As sour cream is a dairy product, it isn’t going to become fresher once it has been frozen and once it has exceeded its expiry date over time it is going to deteriorate in quality.

If you are looking to preserve your sour cream to enjoy it in the future as a food topping or dip, freezing it isn’t the correct method.

The considerable change in the texture means that it should only really be used for cooking or baking recipes. Once thawed not only does the consistency make it harder to spread but it may not appear to be the most appealing either.

Consider the amount of space that you have inside your freezer and how much sour cream you want to freeze.

As mentioned, sour cream can’t be refrozen so it is necessary to divide it into portions beforehand according to the amount required for your recipe. This may mean that you have a lot of individual containers that are going to consume room inside your freezer.

Your containers need to be airtight as this prevents the sour cream from becoming hard or lumpy, however fresh sour cream can be kept inside its original container.

Bad sour cream can be identified by its color or smell. If your cream is smelling different with visible mold or discoloration this highlights that it has gone off.

Sour cream is a versatile product that is commonly sought after for its flavor and taste.

Often sour cream is used as a dip or a topping, however, it can also add a delicious taste to cooked dishes. If frozen and thawed correctly sour cream is safe to use in many cooking or baking recipes.

Do not be put off if your sour cream appears a little unappealing in consistency. While freezing it can ruin the texture of sour cream it doesn’t ruin its taste.

If you intend on using sour cream as a dip etc it should be used when it is fresh. After freezing it, you should only really use it in cooked or baked dishes.