Freezing mushrooms is a pretty common way of preserving them. Sliced mushrooms are often found in the freezer section, but what about different kinds of mushrooms?

Mushrooms are a strange vegetable (well, fungus) and different kinds have different textures and consistencies. Different kinds of mushrooms react differently to being cooked or roasted, so what about being frozen?

Can you freeze portobello mushrooms? Yes, you can. You can pretty much freeze any kind of mushroom, but they will all come out of the freezer looking, tasting, and feeling different than when you put them in. 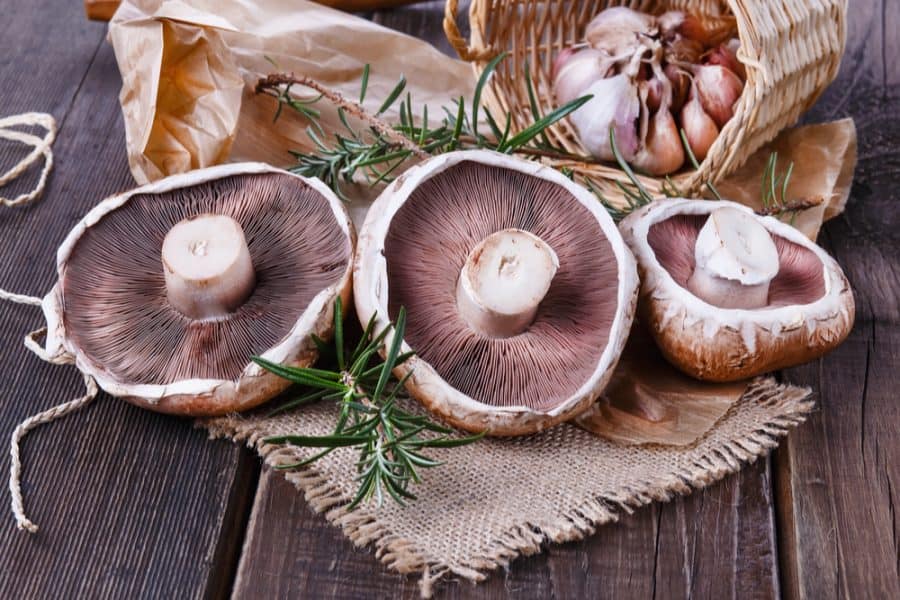 But, unlike most other vegetables, portobello mushrooms need some prep before they can be frozen.

So, to help you out and make sure you don’t spoil your mushrooms, here’s our guide to properly freezing portobello mushrooms.

How to Freeze Portobello Mushrooms

Here is a step by step guide to cooking and then freezing portobello mushrooms:

Step 1: Cleaning. We’ve all had mushrooms from the grocery store that have still had some dirt on them. This won’t harm you and won’t interfere with the cooking or freezing, but it also won’t taste very nice.

So, may sure to clean the mushrooms with a paper towel beforehand. You can rinse them under the faucet, but this will make them slimy and not as nice when cooked or frozen.

Alternatively, you can simply sauté them plain. Then, once you defrost them and fry them up again, you can add your chosen seasonings.

Step 3: Cooling. Once your mushrooms are sautéd, transfer them to a plate that has a couple of layers of paper towel on it. The paper towel will absorb the oil and grease which you don’t want going into the freezer as well.

If the mushrooms are especially oily, place another couple of layers of paper towel over the top and press down gently on them. This should absorb the oil and grease from the other side.

Step 4: Leave them. Now, just leave them to cool. This shouldn’t take too long and they should cool within about 10 minutes. Don’t be tempted to put them in the freezer before they have cooled down.

Freezing them when they are hot or warm will produce steam which will then become trapped inside the container. This will eventually freeze and, when defrosted, the water will make the mushrooms soggy and mushy.

Placing something hot inside the freezer may also defrost other food items next to them. It can also change the overall temperature of the freezer which will potentially defrost and spoil the other food inside.

Step 5: Freeze. Once the mushrooms have cooled, transfer them into an airtight container and place them inside the freezer. Once frozen, portobello mushrooms can keep for up to 12 months.

So, if you have lots of mushrooms, it’s a good idea to freeze them in portion sizes. This means you can just defrost as much as you need. Otherwise, you might end up wasting the mushrooms as they can’t be refrozen and won’t keep very long in the refrigerator.

How to Defrost Portobello Mushrooms

Now you know about freezing portobello mushrooms, let’s talk about defrosting them. Many vegetables become a lot softer and almost mushy once defrosted. Freezing food can change its texture and taste, so it’s important to do it properly.

Leaving the mushrooms to defrost by themselves is one option, but frying them up again is better. You probably won’t want to eat cold, defrosted mushrooms.

You can defrost in the refrigerator, on the kitchen worktop, or using the defrost setting on the microwave. These will all produce slightly different results.

Defrosting in the refrigerator will take longer, but it will be a more gentle process and the cold will keep them fresh for longer.

Leaving them at room temperature on the worktop may cause them to defrost too quickly and make them warm and more likely to go bad.

Using the defrost setting on the microwave may make them too hot and can potentially boil them.

As with many other foods, especially vegetables, mushrooms won’t have the same texture once defrosted. Defrosted mushrooms will be wet, soggy, and slimy. This is why it’s a good idea to cook them again once they have been defrosted.

If you want to freeze the portobello mushrooms raw, then this is possible but they are much better after they have been sautéd.

Before freezing mushrooms, consider what you’re going to use them for. Certain meals won’t work with fried mushrooms.

Cooking raw mushrooms from frozen is possible, but they won’t be particularly nice and, as they will have a high water content after freezing, they won’t take on the seasoning as well.

Overall, the answer is yes, portobello mushrooms can be frozen. They will work best if you sauté them after they have been defrosted as this will allow the excess water to evaporate.

But, as with pretty much any other vegetable (or fungus), they won’t be the same when defrosted.