Radishes are a vegetable that don’t come up in dishes all that often, but they are surprisingly versatile.

They are also very divisive. Radishes are definitely a “love ‘em or hate ‘em” kind of food. So you can’t always guarantee that people will eat them.

If you’re in a position where you have an accidental abundance of radishes, you may be wondering what to do with them. When left unchopped, radishes can keep in the refrigerator for quite a while before going bad. They will stay fresh for about 10 days before beginning to deteriorate. But will last a few more days before becoming inedible.

So, if your radishes aren’t likely to last any longer in the refrigerator or you just have way more than you actually needed, you are probably wondering if you can freeze them. 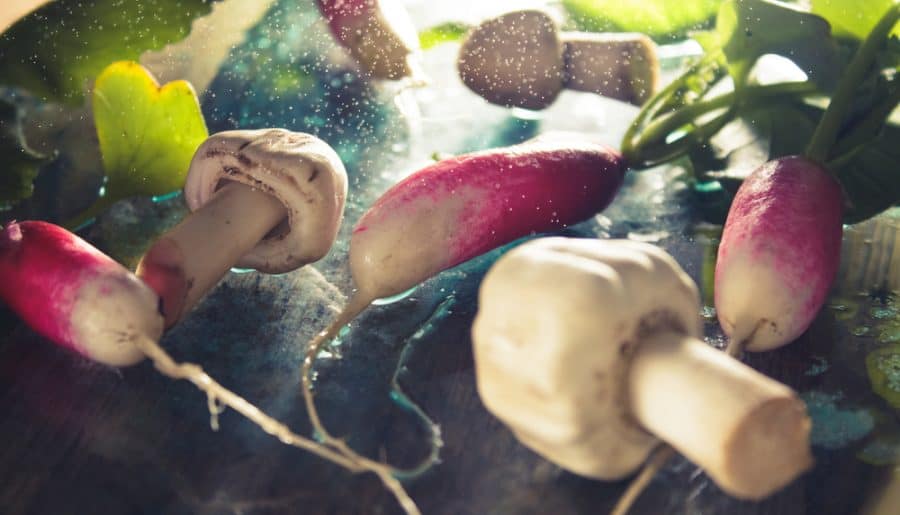 Freezing vegetables is a very normal way of preserving them, but you very rarely (if ever) see radishes in the frozen veg aisle. But, that doesn’t mean you shouldn’t give it a go as you can, in fact, freeze radishes.

As when freezing any food, there are a few things to consider before just throwing a few whole radishes into your freezer drawer. So, here’s our guide to the best way to freeze, and then defrost, radishes.

HOW TO freeze radishes

Although it might be tempting to freeze them whole, you need to do some prep work before putting radishes in the freezer.

If you freeze them whole, the skin will likely split. This will change the shape and consistency of the radish. This is because the inside of the radish, if not yet fully frozen, will spill out and then freeze. Then you will be left with some oddly shaped, half-exploded radishes that can’t really be used for anything.

A better option is to chop or slice them up. Eating radishes whole isn’t many people’s idea of a tasty treat, so cutting them up shouldn’t be a problem. Slicing radishes is the most common way of cutting them up, especially for a salad. But you don’t have to slice them if you know you won’t need them like that.

To give you some more help and guidance, here’s our step by step guide for freezing radishes:

Step 1: Clean them up. This is especially important if you’ve grown the radishes yourself. Make sure to scrub them clean so that they don’t have any dirt or residue left on them. You should always wash vegetables before doing anything with them. Even if they have come from a sealed plastic packet, they may have pesticides still on them. They may also have a little dirt that was missed when they were originally washed.

Step 2: Cut them up. The most common way to eat radishes is to slice them. So, top and tail the radishes (cut the tops and bottoms off) and then slice them. Try not to slice them too thinly or they will be too soggy when they’re defrosted.

Step 3: Boil them up. Well, not exactly. Blanching is the correct term. Bring a pan of what to the boil and add the sliced radishes. Boil them for around 2 to 3 minutes, depending on thickness. Don’t let them go too soft, this is just a quick boil to slow down the enzyme process. Slowing down this process will keep them fresh for longer as they won’t degrade.

Step 4: Cool them. Once they have been boiled for a few minutes, carefully remove the radishes. Transfer them straight into a bowl of ice-cold water, add ice cubes if you can, and leave them for the same amount of time as you boiled them.

Step 5: Now you can freeze them. Now that the radishes have been blanched, they are ready to be frozen. Drain the bowl and pat the radishes dry with a paper towel. This will stop any water droplets from freezing onto them. Then, transfer the radishes into an airtight container and place them in the freezer.

How to Defrost Radishes

Now that you know how to properly freeze radishes, you need to know how to defrost them. You can leave the radishes to defrost in the refrigerator, but this isn’t the best way.

Run the radishes under the cold faucet (but not too cold) and they should defrost quite quickly. Run them under the water until they are soft. You can also transfer them to a bowl of cold water and leave them for a little while.

Once they are soft, they are ready to cook. They won’t have exactly the same crunchy texture as before and won’t have as rich a taste. But they will still cook well. Radishes become soft when cooked any way, so you shouldn’t notice too much of a difference.

Factors to Consider Before Freezing Radishes

As with freezing any food, radishes won’t be exactly the same once they have been defrosted. They will become quite soft and will lose some of their crunch and their flavor won’t be as strong.

If you’re considering freezing radishes to use them raw in a salad later on, then this isn’t such a great idea. Radishes add a lovely crispness to a salad, so you don’t want to replace them with cold soggy versions.

Radishes are best frozen when they are fresh. Freezing them when they are at their crunchiest and have their richest flavor means that they will be nicer when they are defrosted. But, this isn’t essential.

You’re probably reading this article because you have some radishes that are close to going bad and you’re wondering if you can save them by freezing. The answer is yes, but they won’t be the best when you take them out.