Naan is a leavened, oven-baked flatbread found in the cuisines mainly of Western Asia, South Asia, and Central Asia. In the US, it is most commonly eaten with curries and other Indian dishes.

Naan is a great food staple and the perfect accompaniment to your evening meal, or as a lunchtime snack to wrap grilled meats or vegetables in.

It’s usually served grilled and has a mild, doughy flavor. It can be eaten plain or is sometimes well-seasoned with herbs and spices such as coriander, garlic, or pepper for an extra kick. 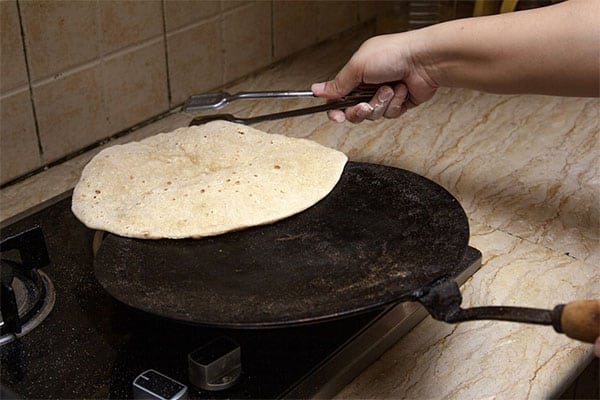 However, whether you bake your naan yourself or buy it from the store, you’ll know that the bread tends to expire quickly. It’ll keep for just 3-4 days at room temperature and just 1-2 weeks in the fridge.

However, you can also freeze naan bread, although it needs to be done in the right way to preserve that delicate texture, otherwise, it becomes excessively chewy once defrosted.

Want to know how to freeze your naan but also salvage that soft, doughy texture? Keep reading to find out how…

How to freeze naan

If you want to freeze an unopened pack of naan bread, it couldn’t be simpler: just place the packet in the freezer and you’re good to go.

However, if you’re freezing leftovers or homemade naan, you’ll need to follow these instructions…

How to defrost naan

The most reliable way to defrost naan is to transfer the flatbread from the freezer to the fridge. This will allow the bread to adjust to the change in temperature slowly, so it doesn’t become soggy.

Leave the naan to thaw for a few hours or overnight.

Factors to consider before freezing naan

While naan will only last 3 to 4 days at room temperature, and 1 to 2 weeks in the fridge, it’ll last 2 to 3 months when frozen.

Naan is best eaten fresh when possible, as this is when it’ll be at its softest, however, it can still taste good defrosted depending on how well you prep the bread for freezing, and how you thaw it.

Naan can become tough and chewy if you don’t defrost and heat it properly.

As we said above, the best way to thaw your frozen naan is in the refrigerator overnight, as this way the bread can gradually adjust to a higher temperature, rather than experiencing a dramatic change. This will reduce the risk of it becoming chewy.

It’s also a good idea to keep a careful eye on your naan while you’re heating it. Whether you choose to heat your naan in the oven, toaster, griddle, or microwave, watch it carefully, as if you overcook it, it’ll become tough and chewy rather than soft and doughy.

It’s also a good idea to spray it with water before heating, or if heating in the microwave, put a cup of water alongside it. The water vapor will help soften the bread.

It also depends on how well done you like your naan. For example, it’ll be softer in the microwave and will brown more in the oven or when heated on the griddle.

It’s a good idea to plan ahead when using frozen food, as you need to take into account how long it’ll take to thaw.

While naan has a short lifespan and has a tendency to become tough and chewy when frozen and defrosted, it is possible to maintain its texture if you take a few steps beforehand, and after freezing, to prep the bread.

The good thing about freezing naan is it’s easy to do and there are several ways you can reheat it after it’s thawed. This allows you to cook the naan to your desired texture.

The most important thing is to ensure you thaw the naan correctly beforehand, and as we mentioned above, the best way to do this is in the refrigerator, which means it can take a while to defrost fully.

However, freezing naan is incredibly easy and is a great way of reducing food waste, and saving money, if you regularly find yourself unable to eat a whole packet of naan with one meal.