Krispy Kreme Donuts are the perfect meeting point of freshly cooked, filled, and decorated donuts and mass distribution and availability.

Or, depending on the week, maybe even 24. But that’s the thing. At some point on the weekend, you might entertain the heresy that there are other food groups besides dough, filling, and glaze.

Side-note: if you entertain such thoughts, we’re not sure we can be friends. No pressure.

But if you get to the point when you can donut no more, can you freeze the so-called “surplus” donuts for the next time you need a sugar hit and a pick-me-up?

Or are you forced to put on a costume and go door to door to find them a good home, like some slightly deranged Donut Bunny? 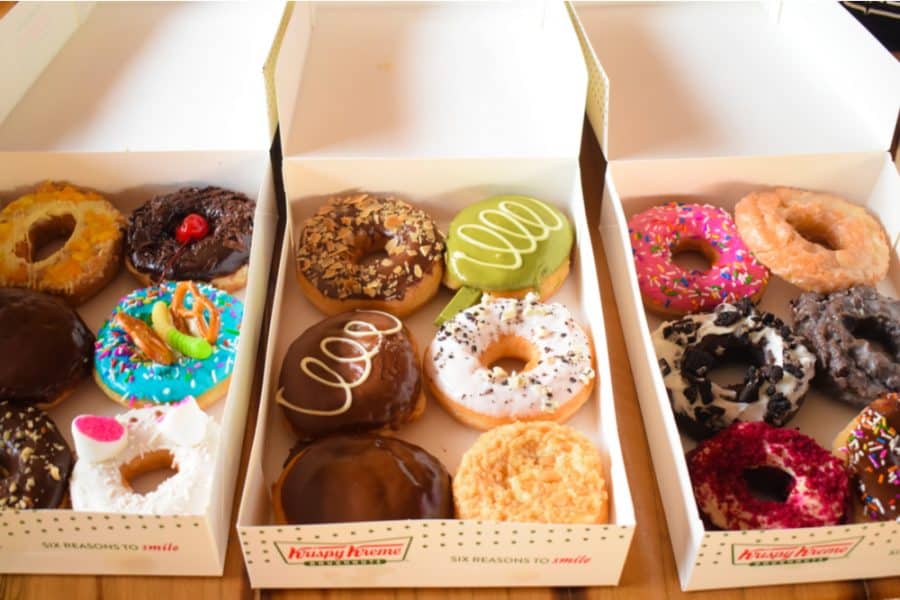 Good news. While it’s by no means the best way to enjoy Krispy Kreme donuts, you absolutely can freeze them for another day. Put away the costume, Sir Hopsalot. We’ve got you covered.

It’s not as simple as you might think though, because Krispy Kreme makes a lot of different donuts. Some are glazed, some are iced, some are filled, and while most Krispy Kreme donuts are yeast-based, there’s that whole cake donut section, including crullers and donut holes.

Freezing’s going to have a slightly different effect on each of your donuts, depending on which you go for.

The saving grace when it comes to the encyclopedia of donut-freezing knowledge is that firstly, the rules break down fairly simply, and secondly, a lot of Krispy Kreme’s donuts are based around similar principles.

The Original Glazed is the Grandaddy or a whole range – essentially, anything that’s a yeast donut with a glaze or an icing can be treated in more or less the same way, because their components behave the same way.

Essentially, a yeast donut has both yeast and sugar in it. What it needs to go old and stale and entirely grim is air.

Granted, the freezing process will slow the aging process down, but if you want your yeast donuts to have a chance of tasting like something you want to eat when you bring them out of stasis, you need to freeze them in an air-tight environment.

Most authorities on donut-freezing recommend a two-stage process.

Stage 1: Grab yourself a cookie sheet, pizza sheet, or any other baking sheet you have to hand. Lay the donuts on the sheet in a single layer. Keep them glaze or icing-side up, and make sure they’re not touching.

Put them in your freezer for between 3-5 hours, till they’ve frozen. Yes, without any of the air-tightness we talked about. Spoiler alert! That’s why there’s a Stage 2.

Stage 2: Take a spatula in hand like it’s the Scraper of Donut Destiny. Gently but firmly – and most of all, quickly separate the donuts from the cookie sheet, and get them into a vacuum-sealable container – either a bag or a plastic jar.

At this point, take as much air out as you can. If you have a vacuum sealer, this is where it finally pays for itself. Extract as much air out of the container as possible. Then put them back in the freezer.

Ideally, freeze them in smaller batches, so if you want just 1 or 2, you’re not breaking the air-seal.

It’s worth noting that with glazed or iced donuts, it will be the glazing or icing that’s your most likely casualty on thawing, because of the thinness and delicacy of that layer.

But the double-freezing process gives you the best chance of getting a glazed donut still glazy when it comes out of the freezer.

Still…it probably couldn’t hurt to get or make some extra glaze for re-dipping…right? Pleasure’s important, people, never skimp on the fundamentals of sugar or excess.

Oh, and thawing donuts? That’s more or less what your refrigerator is for. You can try to heat them from frozen in the microwave if you’re in a real time-crunch, but keep a constant eye on them, and check every 30 seconds, or what you’ll end up with is most likely sludge.

You didn’t pay Krispy Kreme for sludge, and you didn’t do all this work for sludge. Please thaw responsibly.

And while we’re at it, never refreeze a donut once you’ve thawed it. You get one shot and cryo-donuts. After that, it’s Bacteria City and a stomach pump.

You can use the same basic method to freeze filled donuts as plain or glazed ones. If they’re filled with fruit-based fillings, you should be fine – be aware that the freezing process will affect the filling differently to the donut and the glaze.

Leave it to thaw for at least half an hour longer than with a glazed donut, and ideally, test the thaw with a skewer or toothpick. A donutsicle may be a whimsical idea, but it might well react badly in your stomach if it’s not properly thawed.

With custard, crème, or chocolate-based fillings, there’s very little getting around the fact that while you can freeze and thaw them, the process is unkind to the delicate, smooth texture.

You can do it, but it’s by no means the same textural sensation when it emerges from the freezer. So that’s a lesson for life – in any batch of donuts, eat the choc-filled ones now, save the Original Glazed for another day. Result? More pleasure all round.

In a sense, the clue is in the name. They’re made with cake flour, and use baking powder or baking soda as a leavening agent. So – while again using the vacuum sealer for best results – you can freeze your Krispy Kreme crullers and donut holes.

As with the yeast donuts, wherever possible, thaw gently to preserve as much of the glaze as possible.

Also as with the yeast donuts, maybe get or make some extra glaze or soft frosting, because you don’t want to go to the trouble of freezing and thawing your crullers just to be shorted on sugar at the last second.