Kiwi is a delicious and healthy fruit that can be eaten straight out of the skin like some alien boiled egg, used in baking, or even added to a salad.

Kiwis are also great in smoothies and have so many health benefits in addition to being tasty.

As kiwis are so great in smoothies, does this mean that kiwi can be frozen? Yes, it does! Like a lot of fruits, kiwi is super easy to freeze. They can then be defrosted or eaten frozen.

You can throw a few chunks of frozen kiwi into your smoothie instead of ice cubes, so that it can be thick and cold but not watered down. 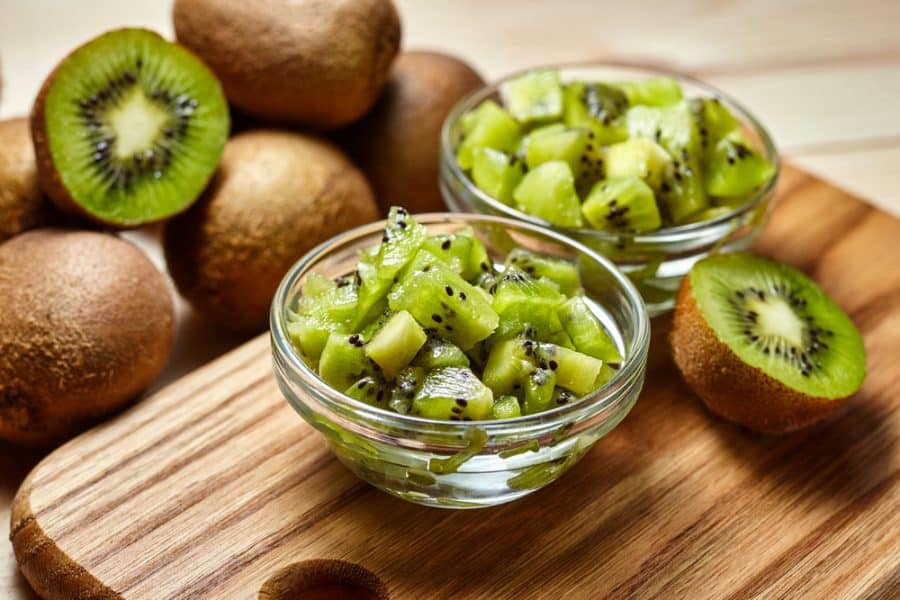 Kiwis can also be frozen into a sorbet as a healthy alternative to ice cream. There’s no end to the things you can do with these strange little fruits.

But first, how exactly do you freeze kiwi? Obviously, just chucking a few into the freezer as they are isn’t the more efficient way. They will freeze but then will defrost weirdly and be difficult to chop up.

We do not recommend attempting to chop a frozen kiwi as it will be like trying to cut into a frozen, furry, egg. (I hope I’m not putting you off here…)

How to Freeze Kiwi

So, now on to how best to freeze a kiwi. It’s super easy to do, so here’s our quick and easy guide to freezing kiwi.

Step 1: The first step might be pretty obvious but you need to peel the kiwi. The fruit will freeze better without the skin and you won’t (at least you shouldn’t) want to eat the skin anyway, so you might as well discard it now.

There are a couple of ways to peel a kiwi. One way is to cut the ends off, hold it in one hand, and then use a knife to peel the skin off as you would with an apple. This is a relatively simple way but it can be difficult.

As you peel it, the kiwi juice will start to seep out making it slippery. Kiwis are also really soft so you might not be able to hold it properly, especially if there is a lot of juice. Not only will this make things more difficult, but it can also be dangerous.

Another way to peel a kiwi (and the way we recommend) is with a spoon. Okay, so “peel” probably isn’t the most accurate term, but this is a way to remove the skin. Simply cut off one end of the kiwi, as you would a boiled egg.

Then, holding the kiwi in one hand, take a teaspoon and place it between the skin and the flesh. Push the spoon all the way down and then push it around the edge until the flesh has come away from the skin.

There will be a little section at the other end where the flesh is stuck, so push the spoon against this and it will come clean.

There, you have a completely skinless kiwi with no mess and, most importantly, not cut fingers.

Step 2: Now, slice the kiwi. You can chop the kiwi into chunks, but this will be more difficult to freeze.

Step 3: Take your sliced or chopped kiwi and lay them out on a lined baking sheet. Then, place another piece of parchment paper over the top, pressing down gently so that the paper is attached to each piece. Then, place it in the freezer.

You can also freeze kiwi in a ziplock bag. Just chop or slice them up, throw them in the bag, and then in the freezer. But, this can result in the chunks or slices becoming stuck together which will be awkward if you’re planning to use it frozen.

How to Defrost Kiwi

Now you know how to freeze kiwi, here’s our guide to defrosting.

Factors to Consider Before Freezing Kiwi

As kiwi has a lot of juice, they aren’t always great when they’re defrosted. They can become very mushy and difficult to use in anything.

They will keep their shape a bit, but even when they haven’t been frozen, kiwi is a very soft fruit that can be easily squished.

But, just because defrosted kiwi isn’t that nice, that doesn’t mean you should avoid freezing it. Kiwis can keep for a long time before they go bad anyway, but frozen kiwi can be kept for up to 12 months.

So if you have some kiwi that is about to go bad, freezing is a good option.

So, overall, the answer is yes, you can freeze kiwi. But, like with pretty much any food, there are issues when it comes to defrosting.

When food freezes, it becomes covered in ice crystals which melt when the food is defrosted. This addition of water changes the texture, consistency, and sometimes even the taste of the food.

But kiwi is different. It might not defrost well, but it freezes excellently and is delicious when frozen.

So, even if you’re only thinking of freezing kiwi to save it from going bad and being wasted, you can still freeze it and make something delicious.