Freezing herbs may not seem to like something many people do, but it’s a great way to preserve them. Parsley is a notoriously difficult herb to keep fresh.

Whether you have tried to keep many a parsley plant alive on your kitchen windowsill or have a handful of leaves lying limp and sad in your refrigerator, we’ve all struggled with parsley.

Of course, there’s the option of dried parsley which is useful, keeps well, and is still delicious but isn’t as good as fresh parsley. 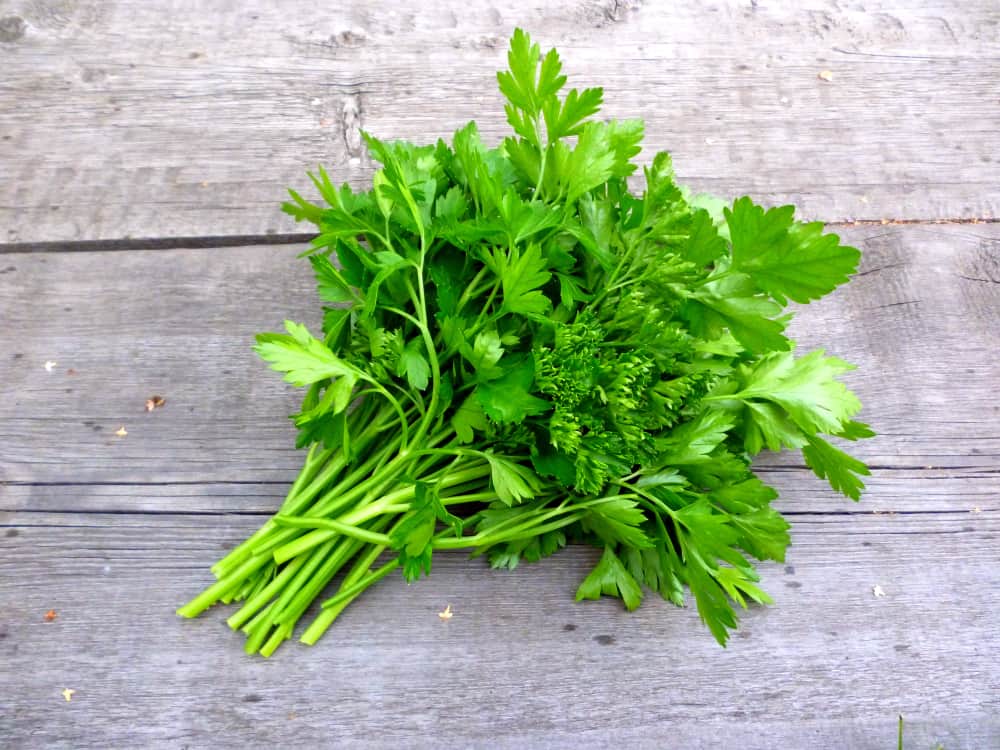 One of the reasons parsley is dried is so that it will keep longer but you can freeze dried parsley. You can also freeze fresh parsley but this needs a bit more work than dried parsley.

So, if your parsley is currently looking a little sad and you’re looking for a way to desperately preserve it instead of tragically throwing it away (again), read on for some tips and tricks.

How to Freeze Parsley

There are a few different ways to freeze parsley, but the best one for you depends on what you will be using it for.

Freezing dried parsley is easy and probably the simplest option in this guide. Dried parsley can simply be placed in a container and then inside the freezer. It will keep its shape while frozen and the pieces won’t clump together.

If you decide to defrost the dried parsley, then it may become soft and soggy. When something is frozen, ice crystals form on them which then defrost as the food defrosts. This water will then be absorbed by the parsley.

But, no problem, simply sprinkle the frozen parsley into whatever dish you might be making. As the food cooks, the parsley will defrost, and the water will evaporate.

Freezing fresh parsley is different from freezing dried parsley. As dried parsley has already been preserved through the drying, it doesn’t need anything additional doing to it.

This is true of fresh parsley (to an extent) and you can place stems and/or leaves or parsley in a freezer bag and just throw it in the freezer.

If you choose to do this, then make sure that you squeeze out all of the air beforehand. Then, when you want to use it, you can just snap off a piece and throw it in with the other ingredients.

There is a chance, however, that fresh parsley may react badly to being frozen and wilt and become discolored. The best way to freeze parsley is in an ice cube tray with butter.

You may have seen this in kitchen “hack” videos and thought it looked like a cool idea but one that probably doesn’t work that well. But let me tell you, it’s a great way to not only keep parsley for longer but completely up your cooking game.

It’s super simple to do as well. Just chop up some parsley and mix it with some butter. Add a little chopped garlic too if you fancy, and then spoon the mixture into ice cube trays. Then, freeze the cubes and take them out as and when you need them.

Voila, you have seasoning ready and waiting in your freezer. It’s delicious and will help keep your parsley from going to waste. It will also make cooking dinner so much easier as you won’t have to prep as much.

How to Defrost Parsley

Defrosting parsley is perhaps not the best option. Once parsley has been frozen, it’s best to use it as it is. When parsley is defrosted, it will potentially take on water and become mushy.

Your best choice, if you choose to freeze parsley, is to use it frozen. It’s unlikely that you will be using parsley in something that isn’t being cooked, so using frozen parsley will be fine.

Remove the parsley from its container and place it on a few layers of paper towels on top of a plate. The paper towels help absorb the water that comes off the parsley as it defrosts. This won’t stop it from going completely mushy, but it might help.

Factors to Consider Before Freezing Parsley

If you plan to use it for roasting, then you may be able to use it frozen but this might not be a great option. As the parsley defrosts, steam will be produced which, if the other food in the oven isn’t also frozen, may affect the cooking process and the taste and texture of the other food.

The best way to freeze parsley is in an ice cube tray with some butter. This will be absolutely delicious, no matter what you’re cooking.

Overall, freezing parsley isn’t a bad idea. If you freeze dried parsley, then it should be okay but this isn’t really necessary. Dried parsley keeps for a long time and if you’re worried that your dried parsley may be going bad, then you’re not using it often enough. You need to make better use of this delicious herb!

If you choose to freeze fresh parsley so that you can use them in cooking when they’re frozen, then be prepared for them to stick together. They may also go bad and become discolored.

If you decide to defrost either the dried parsley or fresh parsley, then be prepared for it to go really mushy and not taste as nice. The best option, by far, is to chop to parsley up and freeze it in an ice cube tray with some butter and garlic. Delicious!