Dill is the underdog of the herb world, and it’s often underrated compared to herbs such as basil or cilantro. It’s a great addition to many home-cooked meals.

However, if you’ve used dill before, you’ll know what it does tend to wilt very quickly, which can often result in food waste if you’re unable to use it up in time.

Fortunately, dill can be frozen, and this is a great way of preserving the herb and getting the most out of it. 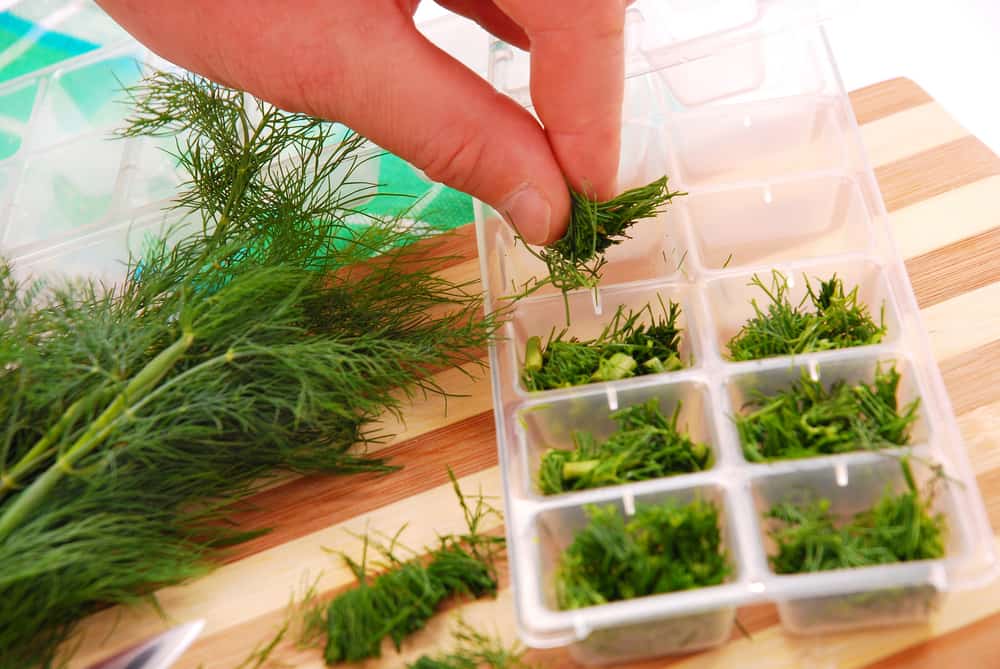 If you grow your own dill, pick it when it’s at peak freshness. Most herbs are best harvested later in the morning when the dew has evaporated, as this is usually when they’re most flavorsome.

Freezing your dill after harvesting is a great way to preserve the herb year-round, and will save any of it going to waste. Stored frozen, intact dill sprigs can be used well into the winter, and possibly even until spring.

Keen to learn how? Keep reading…

How to freeze dill

Freezing fresh dill is simple and effective. To do this, you’ll need a few simple items such as:

How to defrost dill

Defrosting dill is even easier than freezing it. Depending on how much you intend to use, simply transfer a portion of the frozen herb onto a saucer and allow it to defrost in the fridge for several hours.

Once fully thawed, you should use the herb as soon as possible and not let it sit in the fridge for days. Defrosted dill is perfect for dishes such as soups, stews, and dips.

It’s best to not refreeze defrosted dill because the herb will lose its flavor after standing at room temperature for too long.

Things to consider before freezing dill

When to Harvest Dill

Dill tends to lose its flavor pretty quickly when dry, so freezing the herb can be a great way of maintaining the flavor for longer. However, be sure to harvest dill at its optimum time of year.

This will vary depending on where you are in the world, however, the end of June to mid-July is generally a good time to harvest dill.

Bear in mind though that this is a while before pickling season, so allow some dill to grow to its full size if you intend to pickle it, as you'll want to use the flowers, too.

You may be tempted to wait until the end of the garden season so your dill will spend as little time in the freezer as possible, but your dill won’t be as tender or plentiful by the end of August and is best frozen earlier.

Or you could seed a second crop of dill at the end of July in preparation for the beginning of September.

To prolong the harvesting season you can also pick off the flower heads as they appear - if you don't intend to pickle your dill later on.

If you are freezing store-bought dill, you don’t need to worry about any of this, just freeze your dill straight after buying it for maximum freshness and flavor.

How to avoid clumping

One issue that a lot of people have when freezing herbs is that they tend to clump together in the freezer, which can make it difficult to use a proportion of the herb as and when you need to.

This is why it’s really important to dry your dill before freezing it. As long as your dill is dry, chopped, and separated before freezing, it shouldn’t form one big lump, and you’ll be able to access it easily.

How long to freeze dill for

Dill is best frozen and kept for between 6 months to a year.

It will taste best if you use it within 4-6 months, however, as it will gradually start to lose flavor after this time.

Dill has a unique flavor and is perfect for sprinkling over potato salads and seafood, or used in sauces or bread. It’s extremely easy to freeze and maintains its flavor better when frozen than when dried.

If you’re buying dill from the supermarket, you can simply chop it up to your desired size and then freeze it as soon as possible to prolong its freshness. If you’re harvesting dill from your garden, pick it before it flowers and then rinse and dry it thoroughly.

Drying your dill is the most important step as this is how you’ll prevent the dill from clumping together in the freezer, which can make it difficult to separate when you just need a pinch rather than the whole portion.

We hope you found this article helpful and enjoy making the most of your dill, reducing your food waste and meal prep time, and, best of all, enhancing your meals with this underestimated little herb!