Yes, you can freeze banana pudding.

Banana pudding is a cold dessert made of vanilla custard, vanilla wafers, and slices of banana layered up and topped with either whipped cream or meringue.

As the pudding sits, the wafers take on the flavors of the custard deliciously. 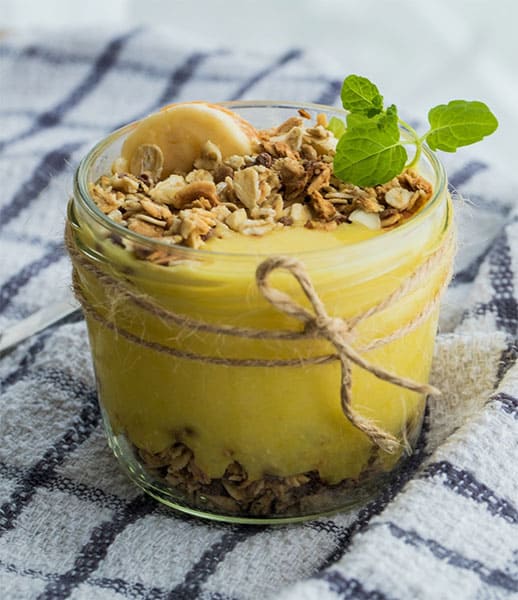 The ingredients do not hold up fantastically to the freezing process, but if you follow our instructions carefully banana pudding can be frozen for up to 2 weeks successfully.

How to freeze banana pudding

One of the biggest issues with freezing and thawing banana pudding is that the bananas oxidise, affecting the taste and aesthetics. To combat this, we recommend filling a shallow bowl with lemon juice before chopping the bananas.

This method will only work if you are baking your banana pudding from scratch and will not work on storebought ones. This is because you cannot separate the bananas from the rest of the pudding if you have bought it premade.

It is vital to freeze the banana pudding in an airtight container to prevent oxidation occurring and freezer burn forming. If using a storebought pudding, you will need to transfer it from the original container to an airtight one.

We recommend a rigid container to prevent your banana pudding getting squashed by other stuff in the freezer.

You can freeze the banana pudding whole in a larger container, or in individual serving sizes. This is good if you live alone and will not be able to finish an entire pudding by yourself.

Cover the top of the banana pudding with a layer of plastic wrap before sealing with the lid.

Label the container clearly with the contents and the date frozen. If you are freezing a storebought banana pudding, we recommend also writing the original expiry date on the label.

How to defrost banana pudding

The elements that make up a banana pudding do not freeze well. For this reason, we suggest keeping it frozen for a maximum of 2 weeks.

To thaw the banana pudding, simply take it out of the freezer the night before you wish to consume. Place in the refrigerator overnight and leave to thaw completely.

In a pinch, you can try submerging the container in a bowl of warm water to thaw. This will speed up the thawing process slightly more than the fridge method but it can have undesirable effects on the texture of the banana pudding.

If you have time, we strongly recommend thawing the pudding gently in the refrigerator.

We do not advise using the microwave to thaw your banana pudding. The rapid and harsh methods involved with microwaving could cause irreparable damage to the texture of the custard in the pudding.

Banana pudding is best served cold, and the microwave could accidentally warm it up, which is not likely to be that appetising.

Do not refreeze thawed banana pudding.

Banana pudding has a high water content. This means that a lot of ice crystals will form during freezing which are irregularly shaped. These crystals can pierce the cell walls of the fruit and can lead to textural changes on thawing.

The thawed pudding may also be watery due to the excess moisture produced as the ice crystals defrost. Banana pudding is also very susceptible to freezer burn due to the large amount of moisture incorporated into the dessert.

Banana pudding is also likely to change in appearance once thawed. This is because bananas will oxidise when exposed to air and turn a brownish color.

When the banana pudding is allowed to thaw, it will be exposed to air. This will not impact the taste of the pudding but may make it less visually appealing and could also make the texture of the pudding slightly mushier.

The dairy and egg ingredients are unlikely to freeze well either and are also highly likely to turn watery once thawed. For this reason, it is important to follow our instructions carefully to ensure your banana pudding keeps the best condition possible after freezing.

It is a good idea to write the original expiry date on frozen storebought banana pudding. This is because it gives a good indication of how long the pudding will keep for once thawed.

In conclusion, banana pudding can be frozen but we do not advise it. This is because the high water content in the pudding can cause textural changes and make the pudding become more watery.

The dairy and egg based ingredients in the pudding also do not hold up well to freezing and can become gummy or split upon thawing.

If you are to freeze banana pudding, ensure you freeze it in a labeled airtight container, covered with a layer of plastic wrap. Do not freeze for longer than 2 weeks, and consume as soon as possible after thawing.

We hope that you now feel secure in your knowledge of how to freeze a banana pudding well to reduce your food waste and save you money.