Whether you’re baking several batches in advance, have some leftover batter, or just want to preserve one extra special brownie to eat on a rainy day, freezing them – as is the case with many baked goods – is absolutely fine.

I’m asserting this after seeking advice from renowned dessert queen Nigella Lawson, whose cooking prowess has never failed me, so we’re in good hands.

Of course, there are some directions to follow to ensure your brownie-freezing goes well. 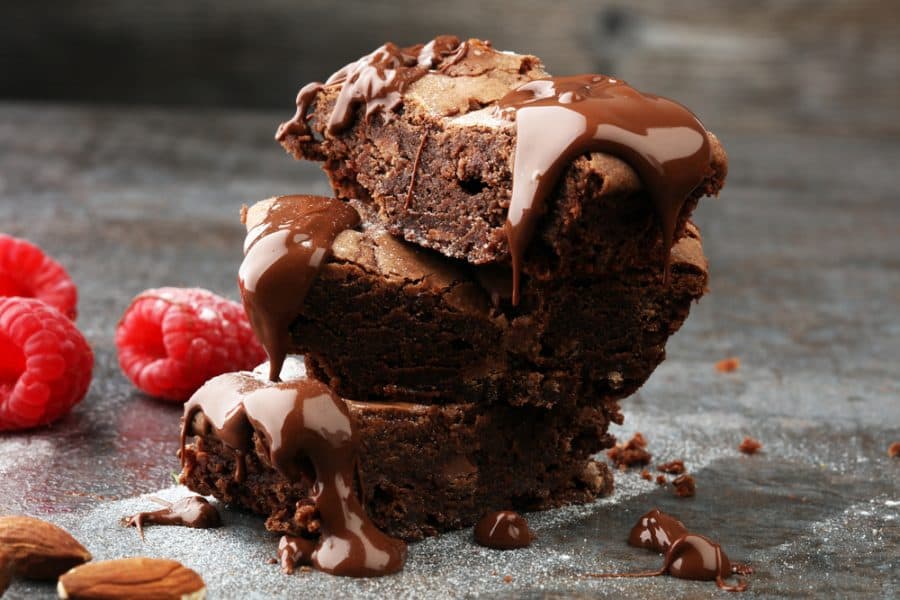 Read on to find out exactly how to store your brownies in the freezer, in whatever form they may take, as well as the best method for defrosting and reheating when the time comes.

Enjoy a warm, fudgy treat as soon as you’re next in the mood!

The Only Exception: Cheesecake Swirls

Okay, so we told a tiny fib: you can freeze pretty much any brownie, but exceed caution when it comes to those with a swirl of cheesecake or cookie dough, for example, as these layers can ‘sweat’ during thawing.

Although it won’t make you ill and it’s more than safe to eat them, you’ll find that they’ll be moister on the surface, which isn’t necessarily always a good thing – you want that crispy top!

Save Some Space: Freeze In A Slab

When your intentions are to prepare large quantities in advance, it makes the most sense – and saves on washing dishes in the long run – to bake your brownies and freeze them in a slab, as opposed to cutting and storing individually.

Do so in your usual pans, making sure to line with parchment paper that sticks out of either side of the tin, then once baked and cooled use these makeshift handles to lift out your brownie slab with ease.

Once in there, they’re good to stay frozen for up to three months, so long as you’ve properly wrapped them to prevent freezer burn from ruining the texture, so you can make them well before their desired date if you’re organised like that.

Individual brownies should be similarly stored and will last for the same amount of time – remember that as they’ve been cut, they’re more susceptible to that pesky burn freezers can cause, so be thorough with the plastic and aluminium wraps.

If you have quite a few cut brownies to store, layer a well-sealed Tupperware container with parchment paper, fill with brownies, add another sheet of parchment and repeat until the tub is full. This prevents having to play freezer Tetris!

Freezing your brownies pre-bake is fine, though it will probably be easiest and the least messy if you transfer from your bowl into a parchment-lined pan, or an improvised foil baking tray, that is then sealed inside a freezer bag for reinforcement.

Again, this is safe to do for up to three months, but you need to thaw the mixture in the refrigerator for a couple of hours before baking, without unwrapping, before you bake – and leave it in for an extra few minutes when you do.

Not only is this a convenient and timesaving method for the future you who needs a tray of desserts on command, but you’ll also achieve a more dense, fudgier bake this way, which is a lovely byproduct if you’re a fan of a gooey brownie!

How To Defrost Frozen Brownies

So, you’ve had a craving or it’s the day of your big event coming up and it’s time to thaw out your carefully baked chocolate treats – but what’s the easiest way to do this and still retain that trademark chewy centre when you tuck in?

First off, remove that quadruple layer of foil and plastic, pop your slap on a plate or tray and allow them to rest at room temperature for up to four hours – keep the sheet of parchment paper on for this part.

Then, peel it off and cut into your desired size and shape; Nigella recommends utilising a knife that is serrated, like a bread knife, as you’re able to saw through that crunchy crust before pressing down through the fudgy brownie layer below.

Her top tip for achieving clean edges on every side of your slice when cutting is to wipe the knife clean in between each cut, to achieve those nice, sharp, professional lines.

For a quick fudge fix, it’s totally acceptable to reheat a brownie in the microwave – just place it on an appropriate plate and blast it for fifteen-second increments until it’s warm and gooey and ready to eat.

Those more dedicated to recreating the oven-fresh brownie feel whilst retaining that just-baked texture should wrap their brownie in aluminum foil and gently warm in their conventional oven for between five and eight minutes.

It’s really easy to accidentally overheat a brownie and bake it further, resulting in more of a cakey texture, so make sure you keep a close eye on it, maybe popping a toothpick or fork into its center halfway through to check.

It isn’t a good idea to re-freeze a brownie once defrosted, as you’ve already put it through its paces and it’s likely to end up tough and unpleasant to eat if you repeat that process.

You may also be tempted to put them in the fridge for safekeeping, but actually, refrigeration only encourages brownies to go stale faster, by crystallizing the starches that help to form the gooey center.

A better tasting brownie for longer is easily achieved by simply storing in a sealed container or vacuum-sealed bag for up to a week, making sure you eat within this time, as this will preserve the moist chewiness we all know and love.

However, if you’ve got somewhere to go later in the day and the weather is especially hot, it’s acceptable to pop them in the fridge for a little while before you go to prevent melting.