American cheese is the consummate sandwich cheese. It just makes everything better no matter what the haters say!

Usually found in convenient slices, American cheese is a processed cheese made from cheddar or Colby cheese. These cheeses are ground up and mixed with emulsifiers and seasoning before being heated to 150°F for about 30 seconds.

Once the cheese has been pasteurized by the heat, it is cooled and then cut into slices or packaged as a block.

The singles that come individually wrapped are only allowed to cool between the wrappings. This is why they are less cheese-like than other cheeses. 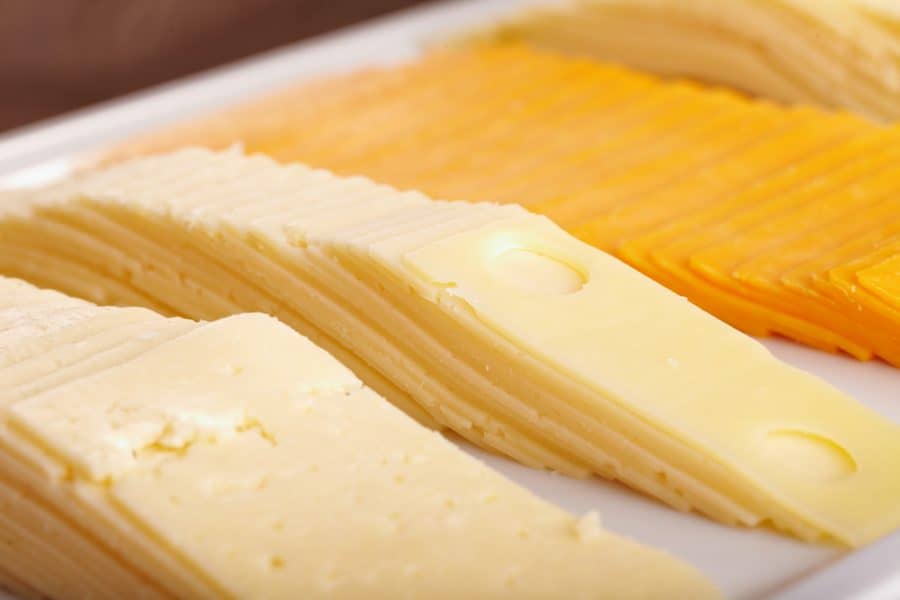 If stored in the fridge in a sufficiently airtight container, American cheese can last for 2-3 weeks. Singles, which are individually wrapped, don’t need any additional containers or wrappings. These bad boys can actually last up to 3 months in the fridge!

The most common mistake is not storing American cheese in an airtight container. This allows the cheese to dry out. It ruins the texture and flavor of the cheese.

If you were hoping to preserve your slices of American cheese, you’ll be glad to know that they freeze well! In fact, freezing doesn’t really alter the taste or texture of the cheese at all.

How to Freeze American Cheese

Let’s look at sliced American cheese first. I’m not talking about the singles you slap on cheeseburgers. I mean the stacks of slices you might use in sandwiches.

If you want to freeze these slices, it’s best to portion them out. This might mean wrapping individually or a couple together. It depends on your needs.

Once wrapped, you should place the slices in a ziplock bag or freezer-safe storage box. This will give your cheese an extra layer of protection from freezer burn.

If you’re using ziplock bags, make sure to squeeze out the air before you seal them.

Label the cheese with the date and then bung them in the freezer. You can store them here for about 6 months. To be honest, you can store them for longer, but it will probably start to affect the taste and texture.

If you bought fresher American cheese, perhaps from the Deli, you need to give it a bit more attention.

Before doing anything, pat down the block or slices with some kitchen towel. This will remove any excess moisture that will become grainy when frozen.

If you have a block of cheese, we advise you to cut it into portions before freezing. Again, this will just make it much easier to defrost and use.

Once dried and portioned, you can freeze it according to the above method.

Fresh deli American cheese will probably go bad quicker than the processed equivalents. This is because it isn’t pumped with preservatives. You can still freeze it for up to 6 months but the longer it’s in the freezer the more off it will taste. It won’t be harmful, but it won’t be like new.

As a dairy product, defrosting American cheese can be a bit dicey. You definitely don’t want to just leave it out to defrost.

Using a microwave or oven to defrost your slices is going to turn them into goo. This might be good for dipping and topping, but it’s not ideal for sandwiches.

The best way to defrost American cheese is to leave it in the fridge overnight. If you’re only defrosting a slice or two then you’ll only have to wait a few hours.

Once defrosted, the cheese will be more brittle than before. It’s not a big deal, you just need to be a bit more gentle when handling it.

If you want to use the cheese as a topper on hot food, you don’t really need to defrost it. This is especially true if you’re using a single slice.

You can just pop the slice on whatever it is you want to top and let it melt as normal. It will take slightly longer because of the temperature difference, but it won’t be too extreme.

There are some who suggest only using defrosted American cheese for cooking. This is because it becomes more brittle. Personally, I’m happy to use it in a sandwich after defrosting.

The main thing you need to consider is how processed your American cheese is.

Heavily processed singles, really don’t need to be frozen. They can last for months in the fridge. The only reason I can see for freezing them is if you’ve bought them in bulk.

American cheese that comes from the deli tends to be fresher and less processed. This means that it will go bad quicker. Just remember this when you’re freezing your cheese. You will need to eat deli cheese sooner than the processed slices.

Love it or hate it, American cheese is a fridge staple.

The processed nature of American cheese means that it generally doesn’t need freezing. It is happy to kick back in your fridge until needed. This is especially true of the singles which tend to contain less than 50% actual cheese!

If you do need to freeze American cheese, you can. Freezing is as simple as wrapping the slices and putting them in the freezer.

Deli American cheese needs a bit more love and attention as it’s fresher, but this too will keep in the freezer.

Most of the time you won’t notice a difference between defrosted American cheese and fresher American cheese. We still think it’s best to eat your cheese within 6 months. 3 months if it’s from the deli.

As always, portioning before freezing will be much easier for you. You should never refreeze American cheese once it’s been defrosted. This is a rule for any frozen food to be fair.