Fettuccine alfredo is one of the most delicious pasta dishes around. It is a creamy, carby delight but it is also very rich.

If you make too much sauce or have some left over in the jar, you don’t want to just add more for the sake of it. This may spoil the dish which isn’t worth the risk.

Instead, you could put it in the refrigerator, but this will only keep for a couple of days.

So, unless you’re planning on having a meal with an alfredo sauce two nights running, another option is to freeze it. 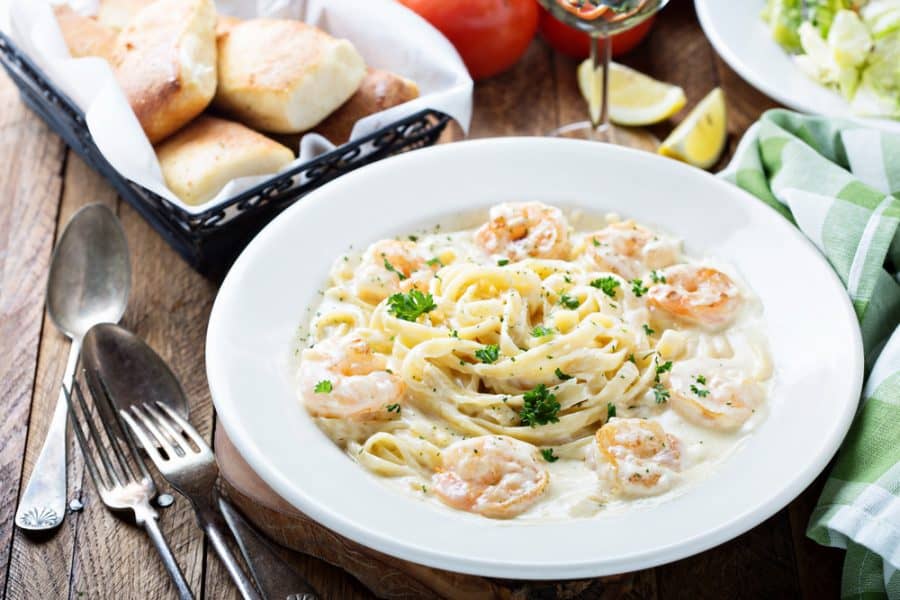 You can easily freeze alfredo sauce and it will keep for a good few months without going bad.

Freezing alfredo sauce is a great way of preserving it and making sure it’s not wasted. Wasting and throwing away any kind of food (especially such a delicious sauce) is definitely a sin.

So, to make sure that you don’t waste this gorgeous dish, here’s our guide to freezing alfredo sauce.

How to Freeze Alfredo Sauce

If you’re freezing store-bought alfredo sauce, make sure you remove it from the glass jar first. Freezing glass is not a good idea. It can be done but is tricky and might result in the glass breaking when subjected to such a low temperature.

We are all trying to cut down on our use of plastics and using glass containers is a great way to do this. But they are not suitable for everything and if you already have plastic containers, not using them at all is more wasteful.

So, to freeze the sauce, transfer it into a Tupperware box or another airtight container. Make sure that the container is completely airtight (so double-check that lid definitely matches that tub).

If the container isn’t airtight, then it might spill and any oxygen that gets in might make it spoil.

Then, simply place it in the freezer! Freezing something like alfredo sauce might seem like it won’t work (which is probably why you’re reading this article).

As alfredo sauce is quite thick it will take a little longer to freeze than a normal liquid. But, if you’re freezing it to defrost at a later date, this shouldn’t be a problem.

Due to it being a cream sauce, alfredo sauce can also potentially separate while in the freezer. To make sure that the sauce doesn’t split, place it in the freezer ASAP.

If you have made the sauce yourself, make sure to wait until it has cooled down first. But, once it is cool, pack it up and place it straight in the freezer. Freezing the sauce when it is at its freshest will reduce the chances of it separating.

But don’t worry if the sauce has been in the refrigerator for a day or two and you just want to freeze it to make sure it isn’t wasted. It will still freeze well, there is just a higher chance that it will separate.

You can also freeze the sauce in freezer bags, but this is a bit of a messy transfer. The sauce may also stick to the sides of the bag once it has defrosted.

If you have a lot of leftover sauce, it’s a good idea to split it into portion sizes. Add one serving to each container so, when you defrost the sauce, you will have just enough for one dish. This way you won’t risk wasting any as you shouldn’t refreeze food.

How to Defrost Alfredo Sauce

So, now that you know how best to freeze alfredo sauce, you obviously need to know how to defrost it.

As mentioned above, there is a risk that the alfredo sauce will separate while in the freezer. To try and prevent this, place the container in the refrigerator to defrost.

Don’t leave it out on the kitchen counter or use the microwave as this will cause it to defrost too quickly. It will also likely make it separate and turn a yellowish color.

Leaving the sauce to defrost in the refrigerator will take longer, but this is a good thing. Allowing the sauce to gently defrost means that it is less likely to separate and won’t become curdled or discolored.

If, after leaving it to thaw in the refrigerator, your alfredo sauce has still separated, don’t worry. The sauce separating won’t ruin it, it’s mostly just annoying.

You can fix this by just mixing it together again. Using a whisk will have the best effect. And anyway, you’re just going to add it into another dish so it will all become mixed up again anyway.

That said, it’s still best to mix it together beforehand to make sure that it is properly combined. It may not mix back together properly when added directly to other ingredients.

Like most food, alfredo sauce won’t be exactly the same after it has been frozen. Freezing food can potentially change the texture, taste, and overall consistency. It won’t necessarily be worse, but it will likely be different.

Before you freeze the alfredo sauce, consider if it’s really necessary. If you might use it again over the next couple of days, then it will be fine in the refrigerator.

But, if you’re sure that you won’t, then freezing it isn’t a bad idea. Frozen alfredo sauce will keep for around 4 to 6 months, so it is definitely less wasteful. But, freezing does require a bit more work.

Overall, freezing alfredo sauce isn’t a bad idea as it will stop you from wasting food. But, as with any food, you should be prepared for it to separate or become a different texture when defrosted. This isn’t a 100% definitive outcome, just a possibility that should be considered.

But don’t let that deter you from freezing alfredo sauce. If you make sure to follow these easy steps (and don’t forget about it) you will have a delicious sauce that has been well preserved.